Jim Olson was one of the first independent luthiers to specialize in acoustic steel-string guitars, having established his shop in 1977. Even so, his business didn’t start to gain momentum until 1991, when James Taylor appeared on the cover of Acoustic Guitar magazine holding one of Olson’s instruments. “James had toured with three of my guitars since 1989, but no one seemed to notice them,” Olson recalls. “After that article appeared, people started to call me and the orders started to come in.” Read Full Story >

Magazine reviews of custom-built instruments are few and far between. After all, such guitars are built-to-order, making a general evaluation difficult. But the Olson SJ with a cedar top and Indian rosewood back and sides is so popular that the UK’s Guitarist Magazine decided to review an Olson “James Taylor” model for its August 1998 issue. You’ll find the full text review and accompanying photos here.

Veteran pop critic Jon Bream of the Minneapolis newspaper Star Tribune did an in-depth article on Jim Olson and Olson Guitars. The November 2nd, 2002 story appeared on the front page of the Metro Edition. You can read the transcripts from John’s article here.

In 2000 the editors of Acoustic Guitar Magazine created the Players’ Choice Awards to allow “real guitarists to voice their opinions about their favorite gear.” In its debut year, over 5000 ballots were cast in 39 categories. Olson Guitars won the Gold Award (highest rating) in the category of companies building fewer than 100 instruments per year. Jim was especially honored to receive the appreciation of Acoustic Guitar’s diverse and discriminating readership.

In 2002 Acoustic Guitar Magazine readers were allowed to vote for their favorite gear in the Players’ Choice Awards. Olson Guitars won the Gold Award in the category of companies building fewer than 100 instruments per year. Jim was again truly honored.

In 2004 Acoustic Guitar Magazine again held the Players’ Choice Awards. This time the category was expanded to include those companies building 500 or more instruments per year. Olson Guitars won the Silver Award from Acoustic Guitar’s diverse and discriminating readership.

Bob Taylor, founder of Taylor Guitars, is a good friend of Jim’s. Bob is well known in the world of luthiery for his generosity and openness with his fellow luthiers. He and luthier friend Tom Anderson gave Jim some crucial advice on using the Fadal. Jim speaks highly of Bob and his influence on modern luthiery. The appreciation evidently goes both ways. In a recent issue of the Taylor Guitars newsletter “Wood and Steel” Bob had this to say about Jim’s work: 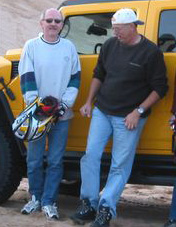 “James Olson and his guitars hold a special place, in my opinion. There’s no nicer, more humble, or more talented person on the planet than James. He is a master of guitar building, working all alone in a beautiful shop on his homestead in Minnesota. I dig the way James makes 60 or so guitars, by himself, in his one man “factory.” He’s good with tools,and sweats blood worrying if his guitars will measure up, and if people will like them. People like them all right, and so do I. He produces a guitar with a beautiful tone that many of todays performers swear by.”

If you are wondering what the heck Jim and Bob are doing by the Hummer check out the Desert Trip page for details and some more photos.